How Positive Reinforcement Training Works & How to Properly Utilize Rewards

Despite some outdated ways of thinking, the truth is that Dogs don’t just know how to behave.

They need to be taught and the behavior you want from them needs to be shaped. Just how kids aren’t born knowing how to ride a bike, or how to read and write, they need guidance to learn. And dogs, as intelligent as they can be, do not generalize well. When you teach a dog to Sit, you don’t just teach him to sit in one place in one room of the house. You go over “Sit” everywhere. In every room of the house, outside in the yard, on walks, in public places, in many different locations, in many different situations, with many different distractions. Eventually, you see your dog will start to generalize that “Sit” doesn’t just mean “Sit in the kitchen”, it means “Sit anywhere or anytime when asked”. This applies to all behaviors you want to teach your dog. You start small, then move on from there, adding things like distance, distractions, different locations, and different situations, until they start to generalize what you’re asking of them is a behavior in general, not a behavior in a specific circumstance.

Dogs learn in two ways, by association and by consequence.

For the purpose of this article, we’re going to refer to only consequence learning. If you want to shape or teach a new behavior, you need to control the consequence of the behavior with something the dog finds good or bad. This will either increase or decrease a behavior. Lets let Science explain a little further… If you open any psychology book and read a bit about Behavior, you’ll learn about “Operant Conditioning”, and the godfather of that research, B.F. Skinner. Skinner theorized that all behavior is influenced by its consequences. By reinforcement or punishment. Now we can get really into this and go into all four quadrants of Operant Conditioning(Positive Reinforcement, Negative Reinforcement, Positive Punishment, and Negative Punishment), but to keep it simple, we will stick to just two – Positive Reinforcement and Negative Punishment. In Skinner’s theory, Behavior that is followed by a Positive Reinforcement will increase and Behavior that is followed by a Negative Punishment will decrease. So your dog performs a behavior, and the consequence of that behavior is praise, treats, toys, or something the dog finds good, you will see an increase in the behavior. If your dog performs a behavior and the consequence is something the dog finds bad(anger, pain, something scary, etc.) the behavior will decrease. A dog can, essentially, learn the same behavior in both ways. However, one of those ways comes with a lot of risks such as: losing your dog’s trust, weakening your bond, and potentially causing serious emotional and psychological trauma, creating dangerous behavioral problems along the way.

When we train dogs using positive reinforcement, we eliminate those risks and teach behavior in small steps.

We build on a solid foundation, adding distractions and practicing in multiple environments. This process is call “generalization.”. We prefer this method because not only does it teach behavior, it builds and reinforces your dog’s trust he has in you. A dog that TRUSTS you, follows your direction because he knows the consequence is going to be something he enjoys and not something he fears. A good example of this is: Recall Training – Coming when called from 2 feet away turns into 5 feet. Then coming from another room in the house, coming inside from out of the house, coming from 20 feet away outside, coming from 20 feet away while sniffing something interesting on the ground, coming from across the street while playing with another dog, and finally coming to you immediately while right in the middle of chasing down a squirrel. It can all be taught and taught well. But, you don’t just jump from one end of the spectrum to the other, expecting the dog to understand without guiding, rewarding, and building a trusting relationship along the way.

To further illustrate our point, we need to elaborate on the the reward factor as it is VITAL in getting the results you want.

Asking your dog to simply walk across a room when he is quietly napping to come to you for a dog treat is one thing. But, asking your dog to come to you, when he is having a great time playing with a friend or chasing down a squirrel, for a regular dog treat, well that’s not a great trade off now is it? Why? VALUE and MOTIVATION. Here we go back to building a solid foundation. Love, praise, or a basic dog treat isn’t always enough. Rewards must be not only be consistent, but they must have value to motivate, and the value is determined by the dog. Read this quick article, it’s provides a great explanation on how to find what your dog considers a high or low value reward: High Value Treats? What are they?

Now, you’re lucky if you have a dog who loves both food and toys.

You can EASILY find rewards of different values for them. Let’s keep up with our example of Recall Training. You want your dog to have a 100% solid recall every single time in any situation? Then the reward has to be valuable enough so it’s motivating for them to always abandon whatever it is they are doing and return to you. By being consistent in rewards and not using punishment we build trust, right? So your dog trusts that you aren’t going to hurt them and that the outcome of listening to you is always positive. But, just because they trust you aren’t going to hurt them, doesn’t mean they are motivated to return every time they are called. We build on this foundation of consistency and trust and make it more solid by varying the rewards, and increasing the level of value in the reward. This is how you get SOLID cues.

The number one killer of motivation is boredom.

You’ve heard the saying “Variety is the spice of life” right? Well, We vary the rewards to prevent boredom because getting the same thing all the time is no fun. And we increase the value of the reward, because as you increase the distractions, you need to make sure that coming back to you is always a more rewarding choice than what it is they’re doing. So chasing a squirrel is extremely exciting for a dog, and extremely rewarding. Coming back to you for a dog treat, the same dog treat they see every day all the time, just isn’t motivating enough. You need bacon, you need chicken, you need cheese, a game of tug, SOMETHING or a variety of SOMETHINGS that are more exciting and more rewarding than chasing that squirrel. If you’ve built that foundation of trust, been consistent in varying rewards, constantly increasing the value of rewards, you condition your dog to have an almost instinctual response to your recall. Mid-chase, you call out that cue, and BOOM! They don’t even stop to think about it, they just circle around full force and come running back to you.

To break this down simply-

You can start at the beginning by teaching your dog something easy and giving them a low value reward every single time. Consistency builds your trust, check. But, don’t just use one type of reward, mix it up. Switch between rewards so your dog remains excited to receive a reward for the same behavior over and over again. Keep their interest, create a curiosity and eliminate boredom, check. As you build that behavior into something more difficult, add distractions, or start practicing in other locations, increase the value of the rewards to make sure they’re always something more exciting & rewarding than the new distraction or location. Maintain motivation, check. You keep following this method of Positive Reinforcement exactly as I’ve laid out and you have a dog who always listens because they’re excited about the outcome and trusts that its going to be something they enjoy. It’s like your dog is thinking “I don’t know what I’m about to get, but if I come back right now, I KNOW it’s going to be AWESOME. Is it bacon? Is it chicken? I DONT KNOW!!! BUT IM EXCITED!!! I CANT WAIT TO SEE WHAT IT IS!!”

So you combine all this stuff, build all these layers – trust, excitement, motivation – coupled with a strong history of reinforcement with your dog by using a variety of rewards in varying, increasing value – You’ll have one of those dogs who will always listen in any situation. Even in an Emergency and even if you don’t have something valuable on you to give him. The behavior becomes so solid, your dog gives it immediately by cue. This can be applied to any behavior you want your dog to learn, not just Recall.

That is Positive Reinforcement in a nutshell. And that’s how you utilize rewards.

To help you visualize all of this, watch this awesome video from The Dog Guy:

In this video, the dog quickly gives precise behavior for a multitude of cues, one after the other, needing no reward between them to keep going. This is a perfect example of what is possible through consistent Training using Positive Reinforcement. The belly rub is my favorite one. What’s yours? 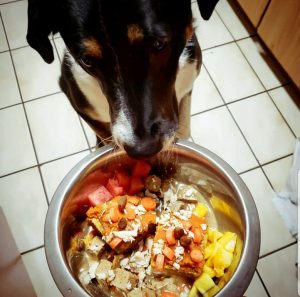 My dog, Malcom,  is one of the most food motivated dogs I’ve ever known. Between his insatiable desire to eat, strange home layout requiring you to go through the kitchen to access the back yard, and no easy way to block everything off, we had a difficult time training him to stay out of the kitchen. Rather than keep trying to train this rule of “no dogs in the kitchen…except when you need to tell me you have to potty or to go outside and play” we decided to create a rule that dogs are welcome in our kitchen, but only in a designated area so we can all co-exist without chaos and havoc. The designated area is a small space by the back door that is out of the way of the main part of the kitchen. Every time Malcom entered the kitchen, we directed him to this specific area by the back door and rewarded him. If he lingered or existed anywhere else, or moved to go after dropped food, he was blocked, directed back to that area, asked to sit or lay down, and rewarded. We’ve done this in every situation possible in our kitchen, at least a few thousand times. Every time I cooked, every meal or snack I ate, he was saved some tasty portion and given only in this area if sitting or laying down. I even did specified training sessions using cues such as: Sit, Down, and Place in the area. We’ve now gotten to a point that whenever someone is in the kitchen for any extended period of time, Malcom is there is his little area, relaxing. Whether he’s getting rewarded or not. Using Positive Reinforcement, consistently, with a variety of different valued rewards, I’ve created this solid go-to behavior for us all to safely co-exist in the kitchen.